His Appeal to Black Voters 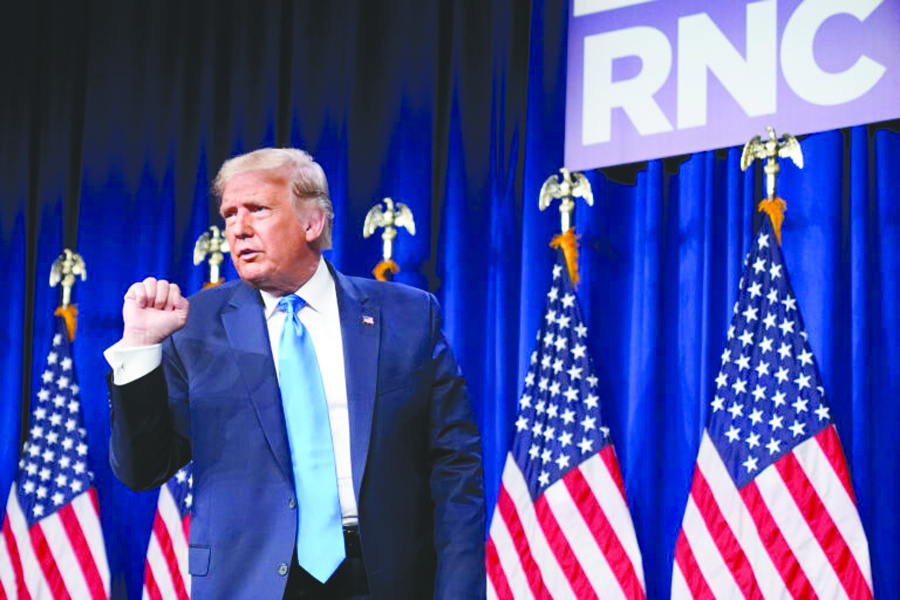 While Democrats spent most of their convention last week trying to fire up their lukewarm base, President Donald Trump spent the first night of his convention working to expand his with a concerted appeal to African American voters.

It began with a powerful speech by Kim Klacik, the dynamic young black congressional candidate in Maryland’s 7th district who became an Internet sensation for her amazing campaign ad in which she gave voters a walking tour of her devastated Baltimore neighborhood. “The Democrats have controlled my city, Charm City, for over 50 years, and they have run this beautiful place into the ground,” Klacik said Monday night. “Abandoned buildings, liquor stores on every corner, drug addicts and guns on the street – that is now the norm in many neighborhoods . . . Sadly, this same cycle of decay exists in many of America’s Democrat-run cities. And yet, the Democrats still assume that black people will vote for them, no matter how much they let us down and take us for granted.”

Next came Georgia Democratic state Rep. Vernon Jones. “As you can see, I’m a man of color, and I’m a lifelong Democrat,” he said. “The Democratic Party does not want black people to leave the mental plantation they’ve had us on for decades.” He said that “Joe Biden has had 47 years to produce results. But he’s all talk and no action.” He praised Trump for “the most inclusive economy ever, with record low unemployment for African Americans” and for criminal justice reform that “ended once and for all the policy of incarceration of black people which has decimated our communities, caused by no other than Joe Biden.” Of all this, Jones said, “Democrats wouldn’t do it. Obama didn’t want to do it. And Joe Biden and Kamala Harris definitely wouldn’t do it. But Donald Trump did it.”

Then came former NFL star Herschel Walker, who talked about his 37-year personal friendship with the president. “He keeps right on fighting to improve the lives of black Americans and all Americans,” Walker said. “Some people don’t like his style, the way he knocks down obstacles that get in the way of his goals. People on opposing teams didn’t like it when I ran right over them either. But that’s how you get the job done.”

Finally, there was a powerful address by Sen. Tim Scott, R-S.C. He talked about his grandfather, who was forced out of school as a third-grader to pick cotton but lived to see his grandson become the first African American elected to both the House of Representatives and the Senate. “Our family went from cotton to Congress in one lifetime,” Scott said. He excoriated Biden for some past comments: “Joe Biden said if a black man didn’t vote for him, he wasn’t truly black. Joe Biden said black people are a monolithic community. It was Joe Biden who said poor kids can be just as smart as white kids.” He talked about Trump’s support for Opportunity Zones that are “bringing over $75 billion of private sector investment into distressed communities” and the president’s unprecedented support for historically black colleges and universities (HBCUs), including permanent funding for the first time.

Why would Republicans expend this much time and effort on the first night of their convention trying to win over the Democrats’ most loyal voting bloc? For one thing, Biden’s African American support is soft compared with Hillary Clinton’s: In recent live polls, he leads among black voters by an average of 67 percentage points, well below Clinton’s 81-point margin in the 2016 exit polls.

Second, Trump has an outstanding record to which he can point. He promised black Americans during a 2016 speech in Charlotte that “whether you vote for me or not, I will be your greatest champion,” and he has delivered.

Third, suburban swing voters like a president who fights for everyone, including those who don’t support him. During their convention, Democrats did not lift a finger to win back the working-class voters who twice cast their ballots for Barack Obama but switched to Trump in 2016. By contrast, Trump is making a concerted effort to win back the suburban voters who supported him in 2016 but who defected to Democrats in the 2018 midterms. These voters heard speaker after speaker call Trump a racist last week, so it was powerful to hear a black American such as Walker say: “I’ve known Donald Trump for 37 years…I take it as a personal insult that people would think I would have a 37-year friendship with a racist…. Growing up in the Deep South, I have seen racism up close. I know what it is. And it isn’t Donald Trump.”

Like Walker, Trump spent the first night of his convention on the offense gaining yardage. It was an outstanding start.