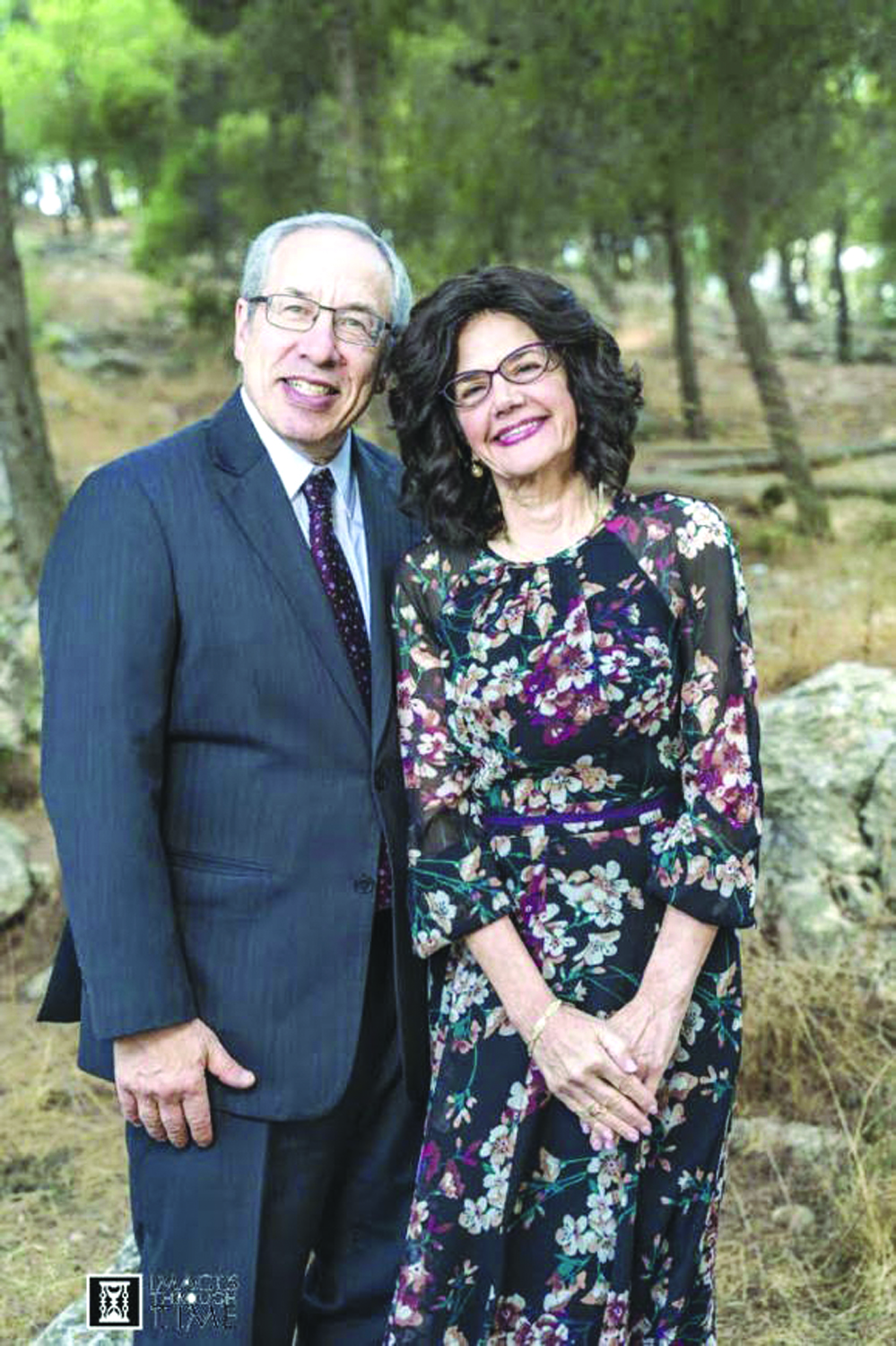 At the end of this month, Rabbi Hershel Billet, my rabbi, neighbor and friend of 40 years, is retiring from the Young Israel of Woodmere.  It would be impossible to encapsulate in a short (or long!) article the impact the Rabbi has had on me and my family (and thousands of families like mine), the shul, the community and, indeed, world Jewry, but I will attempt to scratch the surface.

As fires raged across Israel in November 2016, Rabbi Billet called out to the community: “From time to time we have been called to stand with Israel.  Now is one of those times. We have always stood tall as a community.”  As usual, it wasn’t about words, but actions. Rabbi Billet quickly raised over half a million dollars to purchase sorely needed firefighting equipment. One cannot calculate how many millions of dollars the rabbi has raised and distributed (always after meticulous research and due diligence) to support individuals, cities, and institutions in need in Israel.  He was also at the forefront of efforts to free Soviet Jews and to support the campaigns to liberate Ethiopian Jews through Operation Moses and Operation Solomon.  Rabbi Billet has also been a strong political advocate for Israel, often accompanying our local politicians on trips to Israel to demonstrate, in the most concrete way possible, how the strategic and moral imperatives of the United States align with those of Israel.

While Rabbi Billet’s impact on world Jewry has been vast, it did not come at the expense of his commitment to the shul or community. During his tenure, the Young Israel grew to be the largest Young Israel in the world.  Shlomo Zuller, past president and long-time Chairman of the Board of the Young Israel, remarks, “Rabbi Billet was always at the forefront, ensuring the spiritual growth of our community as a whole and each of its members in particular.”

Rabbi Billet’s deep and broad knowledge of Torah is widely respected, and his shiurim and classes – especially the legendary jokes he routinely peppers in them – are deeply appreciated in a community that values Talmud Torah. The rabbi’s expansive knowledge of Jewish and world history is matched only by his uncanny ability to bring them to life.  He uses his mastery of current events and political trends to bring important context to the timeless Torah messages he delivers.

Rabbi Billet has always encouraged congregants to develop a deeper understanding of what their observance is about. For example, the rabbi transformed the shul’s appreciation of Tisha B’Av, initiating many years ago an annual experience of the Kinot in which they were not only recited but reviewed and explained in depth, given historical context. Shul members have felt a strong sense of what Tisha B’Av is really about and how it has been experienced historically by Jews over the generations.

Rabbi Billet also believed in exposing members of the shul to a broad array of thinkers, teachers, and activists, inviting provocative and exciting speakers and scholars to showcase the diverse and interesting learning, activism, chessed and tzedaka represented within the Jewish community.

Stuart Wagner, the current president of the Young Israel of Woodmere, highlighted how Rabbi Billet welcomed every chance to increase Torah learning opportunities for the children and adults of the community. “This was the standout quality: whenever it was a matter of adding to Torah study, Rabbi Billet always supported a program, a series, a class, an idea.”

He also strongly promoted and highlighted the learning and political work of women in the Jewish community, welcoming many talented women to speak and give classes in the shul. There can be no doubt that the rabbi’s appreciation for the Torah and talent of women in our community emerged in part from being married to one such learned and talented woman, our rebbetzin, Rookie Billet, whose impact on our community has been immeasurable.

Rabbi Billet also saw the importance of a “big-tent” style community, recognizing that bringing many different people together would require acknowledging and accommodating different sets of needs. Nowadays, the Young Israel of Woodmere is well-known for its diverse array of minyanim for all different demographics and davening styles, making the shul welcoming to so many. Rabbi Shalom Axelrod notes, “Rabbi Billet has been instrumental in the continued growth and direction of the Young Israel of Woodmere. His care, devotion, and leadership on behalf of the community is an inspiration. Rabbi Billet’s vision to offer multiple minyanim serving the needs of the various members of the shul transformed the Young Israel of Woodmere into a bastion for Modern Orthodoxy in America.”

Early on, Rabbi Billet understood that, for his shul and its members to thrive, the core Jewish institutions in the community also had to thrive. The rabbi was instrumental in the creation and expansion of such community-wide institutions as the eruv, the mikvah and the Vaad Hakashrus. All these efforts required a tremendous amount of skillful, frank, and open discussion among stakeholders representing many diverse hashkafos (outlooks).  Rabbi Billet was uniquely skilled at facilitating these discussions, keeping people focused on the “big picture” and successfully advocating for unity in the community and compromise across differences.

Despite all his accomplishments, I’ve always been struck by Rabbi Billet’s humility. He has always resisted receiving kibbudim (honors), insisting instead that they be given to others.  If someone held a door open for him, the rabbi always waited for that person to enter first.  Similarly, at communal Shabbos meals, Rabbi Billet would go to the back of the line for washing hands and at the food buffet. He views himself as part of the crowd and treats all people with respect, regardless of creed or color or wealth, or anything else.

However, it would be a mistake to confuse humility with lack of resolve.  Rabbi Billet has routinely taken strong, principled stances on many different issues irrespective of their popularity.  Many years ago, becoming increasingly concerned with the growing drinking problem among young people in the community and believing that the excessive amount of drinking at shul kiddushim was contributing to this problem, he courageously urged the board to ban hard liquor from the shul. This was a radical and unpopular move at the time, but the rabbi stuck to it because he believed it was the right thing to do. He never avoided controversy if he believed strongly enough in the importance and moral worth of an issue. Sometimes his stances were unpopular, but they always proved right for the Young Israel of Woodmere community. Stephen Savitsky, a member of the shul and former president of the OU, reflects that Rabbi Billet is “the most honest, ethical and morally correct rabbi I have known.”

Rabbi Billet is also in possession of a priceless and powerful trait, a sharp and acerbic sense of humor. Besides using his sense of humor as a teaching tool, the rabbi brings humor sensitively into the most challenging of contexts. And, most importantly, he is also always the first to laugh at himself. If a joke during a sermon would fall flat, the one person who would always laugh out loud was Rookie, which would prompt the rabbi to say, “Thank goodness for Rookie!”

Being the rabbi of any shul, but especially a huge congregation like the Young Israel, brings with it many responsibilities but none more important than ministering to the life-cycle needs of its congregants.  And, over the 40 years I’ve observed Rabbi Billet in action, the trait that stands out the most for me is his compassion for and attunement to the individuals and families that make up our kehillah. In particular, I’ve witnessed his profound compassion, sensitivity and empathy under incredibly difficult circumstances when people feel isolated or alone. He has been a source of comfort and strength for so many within the community and beyond.  His sensitivity, presence, and faith-infused real life wisdom have supported and accompanied many families during their most painful times of personal loss and bereavement.

Beyond the individual attention, Rabbi Billet’s leadership has been nothing short of heroic during the many profound challenges the community has faced over the years such as 9/11 and Hurricane Sandy and especially during the past months when he was called upon to minister to the great needs and concerns of his congregants as a result of the COVID-19 pandemic. As he has been doing for the past forty years, Rabbi Billet addressed their economic, health, and life-and-death struggles with grace, dignity, and compassion. This time, though, the scale of the challenges was almost unimaginable.

Rabbi Billet would be the first to acknowledge that his service to the shul and community was as part of a team that included his indispensable life partner, our beloved Rebbetzin Rookie Billet. The rebbetzin has worked tirelessly on behalf of the shul over the past 40 years, in addition to raising a family and playing a crucial role in the Jewish education of countless young women, first as a teacher, both in the formal classroom and at Camp Morasha, and for many years now as a school administrator and principal In addition, Rebbetzin Rookie is a full partner to the rabbi in counseling congregants struggling with life’s challenges, with her trademark deep insight, sensitivity, and grace.

It is hard to believe that forty years have passed. We have been enormously blessed to have had as our rabbi a learned and principled man, a man of integrity, humility and humor, a man whose moral compass always points straight ahead.  I am sure everyone joins me in wishing Rabbi and Rebbetzin Billet many years of good health, happiness, peace and nachas, ad meah v’esrim.