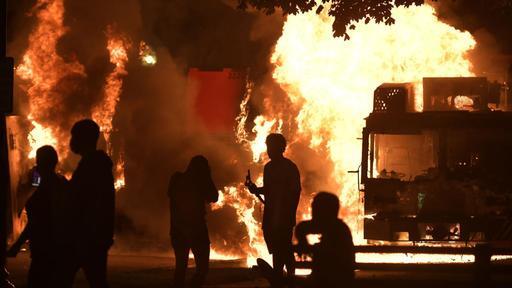 For months, Democrats ignored or excused the chaos engulfing our cities. Sen. Kamala D. Harris, D-Calif., went so far as to raise bail money for those arrested during the riots in Minnesota. The looting and vandalism went completely unmentioned at the Democratic convention. In his acceptance speech, Joe Biden condemned the violence in Charlottesville three years ago but not the violence that was taking place in Portland, Ore., that very week.

Now, all of a sudden, Biden is finally speaking out. What changed? The polls. A new Harvard CAPS/Harris Poll finds 77% of Americans are extremely or very worried about crime in our nation’s cities, and a majority believe that local officials are not arresting and prosecuting the perpetrators. So, Democrats have come up with a new strategy: instead of ignoring the violence, they are trying to blame it on President Trump. The anarchy, the vandalism and assaults on ordinary citizens in Democrat-run cities, they say, is not the fault of Democratic leaders. It is “Donald Trump’s America.”

Let’s go back to the very beginning. The unrest we are witnessing today was sparked by the brutal killing of George Floyd in Minneapolis. Who oversaw the city’s police force and its policy and procedure manual that explicitly allowed the “knee-to-neck” restraint technique that took Floyd’s life? It was local officials in the Democratically controlled city, not Trump. In virtually every major city where violence is taking place, Democrats run the cities, and the cities run the police forces.

And what has allowed the violence to continue unchecked for months? The refusal of Democratic state and local officials to take forceful action themselves or accept Trump’s offer to help quell it. In our federal system of government, the president has to either wait for governors to ask for help or override them by invoking the Insurrection Act. That law has been used by a dozen presidents to put down violent unrest, but when Trump suggested he might use the law, Democrats became apoplectic and accused him of wanting to use the U.S. military to crush peaceful protests.

The fact is that allowing chaos in American cities is a policy choice by Democratic officials – and so is ending it. In Kenosha, Wis., Democratic Gov. Tony Evers called in the National Guard and quickly stopped mass arson and rioting. By contrast, Democratic Seattle Mayor Jenny Durkan stood by and allowed gun-toting radicals to take over several city blocks for nearly a month – waiting until two people were killed before dismantling it. In Portland, Democratic officials have allowed the uncontrolled violence to go on for three months. When Trump sent federal officers to help protect the city’s federal courthouse, Democrats howled in protest. Oregon’s Democratic governor, Kate Brown, called the federal agents an “occupying force.” Portland’s Democratic mayor, Ted Wheeler, declared that “we do not need or want their help.”

Not only are Democrats failing to control the violence, the intellectual left is also legitimizing it. The author of a new book called “In Defense of Looting” recently told NPR that looting is a strategic resistance tactic to fight injustice that “gets people what they need for free immediately…without having to rely on jobs or a wage.” The Nation published an article called “In Defense of Destroying Property.”

Now Democrats who have opposed any federal intervention are complaining Trump “can’t stop the violence.” Sorry, they can’t have it both ways – refusing Trump’s offer of federal assistance to subdue the unrest but then blaming him when the unrest continues. Democrats have told Trump: stay out; we’ll handle this. That means Democrats now own the results.

Amazingly, they are actually trying to use the violence that they failed to control to win control of the White House. On Monday, Biden asked: “Does anyone believe there will be less violence in America if Donald Trump is reelected?” Translation: If you vote for Trump, your cities will continue to burn. That sure sounds like blackmail.

In his speech, Biden mentioned “right-wing militia” but not antifa or Black Lives Matter. Sorry, it is the radical left that is doing the looting, rioting, arson and harassment of people going about their lives – and Americans know it. Many millions have seen the video of “peaceful” protesters bullying a woman at a D.C. restaurant because she would not raise her fist in a black power salute. Millions more have watched the video of Sen. Rand Paul being attacked as he left the White House.

Americans understand that Democrats are in charge of the cities on fire. They know their policies unleashed the violence, and their elected leaders are failing to suppress it. They know that the riots are Biden’s America, not Trump’s.