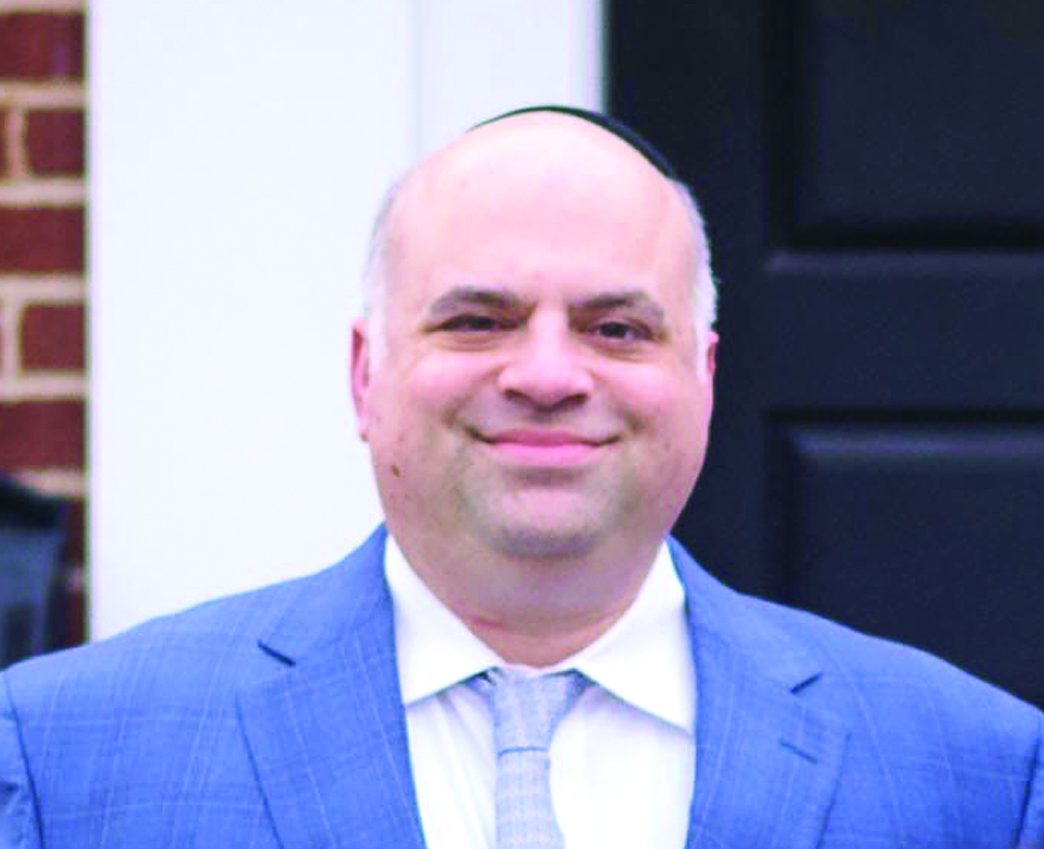 Eli, why did you decide to run for Trustee?

Well, interestingly, it kind of happened organically. In my neighborhood, we were having a couple of area related issues. One was unsafe driving and another was car break-ins. Having a family with five children, I was concerned and got involved to remedy these issues. So I worked with the Village to put up signage and to bring awareness to unsafe driving. It felt really good to help take care of my neighbors and their kids. I also worked with the Village to put up a gate in an area which we identified as an escape route for petty thieves. Both of those initiatives were very successful and increased our quality of life. But the truth is that, on the crime front, there is a lot more work that needs to get done because of what is going on in New York right now.

If I had to pick one issue which made me decide to run for trustee, it’s primarily because we need to make Lawrence a fortress, a safe haven in which there is absolutely no crime whatsoever, where people feel completely at ease when they lay their heads down on their pillows at night. It may sound radical, but it’s not; it is very simple to do.

What is your vision of what Lawrence should  look like?

It’s pretty straightforward. Here’s how I feel – outside the Land of Israel, Lawrence is among the greatest places in the world to live and raise a Jewish family. That’s part of why I and hundreds of my neighbors work so hard in life, to live in such a great place. So we need to keep it that way.

Do you have any experience in government?

I worked for two congressmen over a couple of years, both of them from Tennessee – Ed Bryant and Harold Ford Jr. I was born and raised in Memphis. Yes, it is still my first love, but I have been here for 20 years, so New York is finally starting to grow on me.

What did you do for each congressman?

Well, with Ed, we focused on drafting legislation and committee work in Washington.

With Harold Ford Jr., I worked back in the district, in Memphis. My brief was community relations and civic outreach. It was fascinating work. Congress is pretty thrilling but local government, that’s where the rubber meets the road.

Back to the crime issue. What exactly is the issue and if elected trustee, what will you do to resolve it?

The issue is petty crime.

Thankfully, in Lawrence, we don’t have many instances of serious crime. Mayor Edelman has done an excellent job working with the police department and assuring that Lawrence remains safe overall. But here is the problem: because of the crazy bail laws that were recently passed which basically allow criminals to commit crimes and be out on the street the same day and because of how the NYPD has been hamstrung by Mayor de Blasio and the defund-the-police crowd, criminals feel like they have free reign. Criminals don’t recognize borders. They don’t say, “I’m a New York City thug; I’m not going to cross the border into Lawrence.”  I have a neighbor down the street who recently had plants stolen off of his porch. In Lawrence! On any given night, there are petty criminals going through cars, sometimes even stealing bikes. That is very violating. It steals away your sense of security and well-being. Petty crime is crime. It’s that simple.

And, remember, a petty criminal is one open house window or bad confrontation from becoming a serious criminal. So we can’t have these people lurking in our streets at all. It’s just not OK.

So I have a simple solution: street cameras.

And not like one, two, or twenty-five. We need to put up enough street cameras throughout Lawrence to own our streets. I want eyes on every street. I want criminals to feel like the wrath of G-d is hanging over them the second they step into the Village of Lawrence.

By the way, there is technology available allowing us to live monitor the cameras 24/7, in real-time, for very cheap. The video feeds are actually monitored by people in the Philippines and India. The second they see any nefarious activity, they inform the local police. So, let’s say it’s 3 a.m., and they see a guy walking down a side street. They immediately notify the police who go to the location to check out the suspicious activity. Trust me, give it a few weeks and in no time, criminals will realize that Lawrence is not a good place to commit any crime, even a “petty” one.

What other issues are important to you?

There are a number of issues that I think are really important. Firstly, thankfully, Mayor Edelman has done a spectacular job at keeping the Village fiscally sound without raising taxes at all. We need to maintain that posture especially while we navigate through the current health and financial crisis. We are certainly in a position to do so if the Village continues to make wise decisions.

What do you mean by wise decisions?

Well, it’s a little-known fact that over the past several years, in particular under the Mayor’s time in office, without raising taxes, the Village budget surplus has grown to in excess of $11 million. As part of the A-Team along with Mayor Edelman and Paris Popack, we are 100% committed to not raising taxes at all.

What are some other examples of wise decisions that need to be made?

One thing is that we need to focus on enhancing the Lawrence Business District and the area around the apartment buildings on Central Avenue. We need to bring that area up to the standards that Lawrence residents have a right to expect.

Then there’s the golf course. We have to manage that kind of green space for our children and theirs. If we can increase membership in the golf course, then more of the money owed will be repaid to the Village. We also need to utilize the country club in a way that more residents get to enjoy it. There’s the small things. We can have an upscale kosher dining hall; the restaurants should be kosher and open to the public. It can be a grade A dining experience. Another to consider, is perhaps a kayak and boat rental at the Marina. The goal is to give more opportunities for Lawrence residents to enjoy at the Lawrence Yacht and Country Club.

Talking about the golf course, some are calling for bike lanes in the area. Where are you on that?

We need to solve the bike lane issue. There are significant legal and logistical hurdles to create a bike lane. But we can overcome that by simply taking another approach. What I propose is just extending the width of the road with asphalt to make a shoulder and to put down a nice, bright white lane that leaves bikers and walkers space to enjoy themselves without the fear of oncoming traffic. Essentially, we are widening the road to create a shoulder that will have enough room for bikers and pedestrians to ride on the side of the road without risk.

What’s your position on whether a commercial development should be built at the sewage treatment plant?

I am absolutely opposed to building a big commercial development there for a number of reasons. Firstly, and most importantly, it is not right to the people who live in the vicinity of the property. We owe these residents a duty to look out for the them and make sure that their experience living here in Lawrence is the same as ours. I live nowhere near that property and it would not affect me personally, but if it negatively impacts those living near the property then I have to look out for my fellow residents, the same way I would want them to look out for me. Like I said, they work hard and pay a hefty sum to live in this great village, and they made their lives here just like the rest of us. If they are against it, I’m against it.

But the Village does stand to make substantial revenue from the project.

That could be. But we don’t have a revenue problem and sometimes you have to make the hard decision and see a value that’s even deeper than money. Even if the Village can make another few million dollars if a commercial development is built there, that is a one-time windfall which will forever adversely affect the character of the neighborhood in the immediate vicinity.

Think of it like this – Lawrence is not zoned for two family homes. Now, let’s say someone comes along and asks for a variance to build a two-family home near your house. You would expect the Village to maintain its standard, your standard, and not allow that to happen.  It is unconscionable for us to disregard dozens of homeowners who would be adversely affected by this commercial development, just because we personally may not be affected by it.

Another thing I’ll tell you is, it will weaken our stance in the lawsuit over the 6th Town at the Woodmere Club. We’re telling them we’re opposed to it and commercial development is not OK but we go ahead and build it in our own backyard. If I were the judge, I’d throw our case out on its head.

So what is your vision for the sewage treatment plant?

I’m all for subdividing it into eight lots on which eight beautiful private homes will be built. That would fit in very well with the character of the surrounding neighborhood.

Are you in favor of building an Aquatic Center with the proceeds of any sale of the sewage treatment plant?

That is one area where pretty much everyone is in agreement – we need to build an Aquatic Center at the golf course for a multitude of reasons. It will provide a world class amenity; it will increase golf course revenue, as discussed above; and it will solidify the golf course’s financial viability.

Will it be open to the public?

The goal is to make it exclusive to Lawrence residents.

You are on the A Team with Mayor Edelman and Paris Popack. Why did you join that team?

One primary reason I find it important to be on the A Team is because we need to work together as a majority to prevent the commercial development, which I think will be destructive for Lawrence. On other matters, we each bring out own ideas but have a mutual respect to hear each other’s opinions. So, I think that we will actually work great together as the A Team.

Thank you, Eli. Good luck in the election.