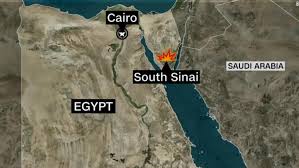 The international force that monitors the Israeli-Egyptian peace agreement said Thursday that eight peacekeepers, including six Americans, were killed when one of its helicopters crashed during a routine mission in Egypt’s Sinai Peninsula. A ninth peacekeeper was badly injured.

The Multinational Force and Observers said a French peacekeeper and Czech member of the force were also killed. It did not release the names of the dead, pending notification of their families. It said the injured peacekeeper was American.