Honey, It’s Sweeter Than You Think 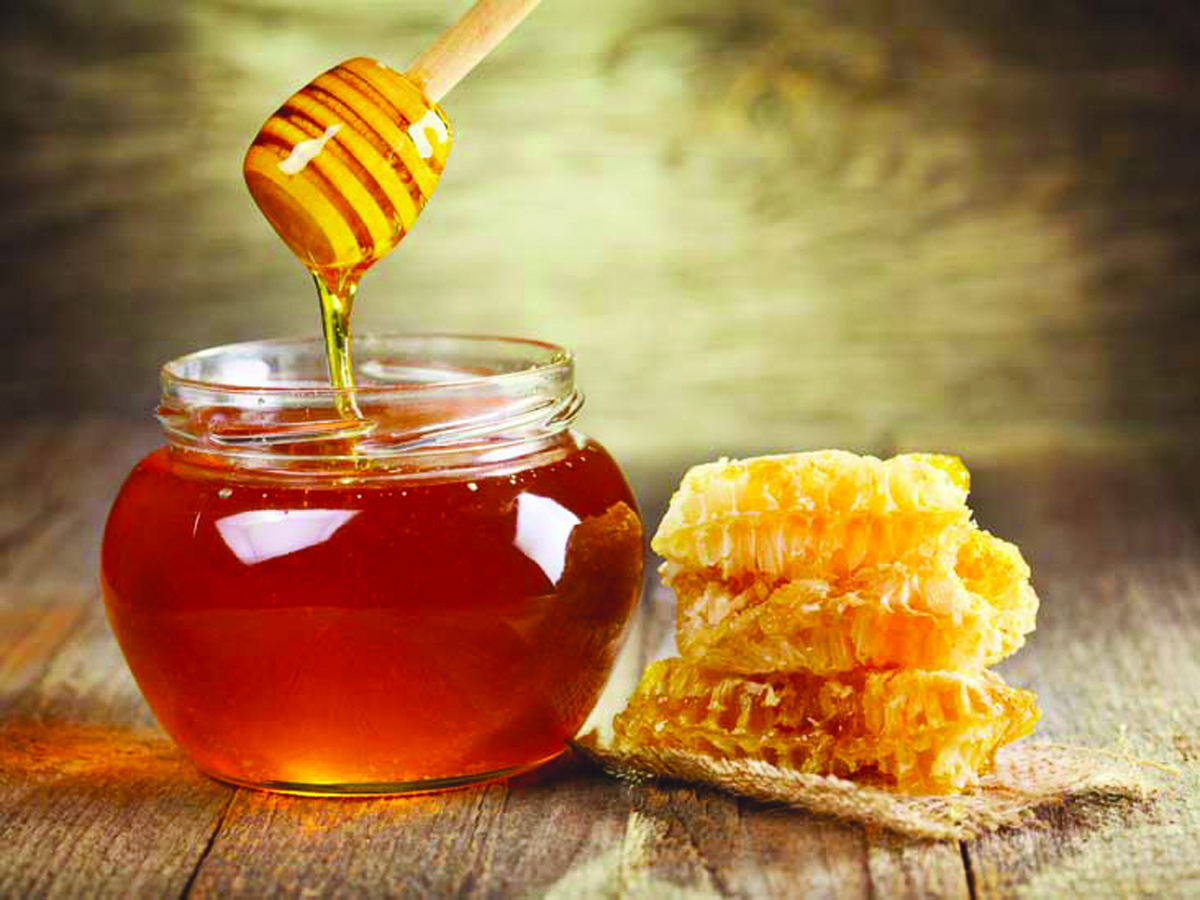 “Honey, could you pass the honey?”

Did you know that there are at least 40 different types of honey? Each one has a distinctive taste and unique properties.  Year after year, the apple is traditionally dipped in the honey, yet honey doesn’t get nearly enough of the recognition that it deserves.

Honey has a lot more to it than its sweet taste.  Not only is honey used to sweeten foods but it is used as a medicine as well.  Honey is well-known for its healing properties. This is mainly because honey is made from hydrogen peroxide – yes, the same hydrogen peroxide that your mother poured on an open wound to prevent infections. When honey comes in contact with a wound, the hydrogen peroxide is released, allowing the honey to kill bacteria on an open wound and even antibiotic resistant bacteria, MRSA.  Additionally, honey absorbs moisture from the wound through its hydroscopic properties, thus further promoting its healing. Even more so, honey contains many phytochemicals such as carotenoids, phytosterols, phenolics, and peptides. These are important for our health in general, but more specifically, these phytochemicals support immunity and activate cytokines which are anti-inflammatory, thus preventing inflammation of a wound.  Due to these properties, recent research suggests that honey may even help treat ulcers.

Honey has been shown to kill cancerous cells as well. Some honeys have been tested for anti-tumor activity.  This is because honey possesses carcinogen-preventing and anti-tumor properties.

Honey has many natural sugars which helps prevent fatigue during exercise.  Ancient Olympic athletes would eat honey and dried figs to enhance their performance. Experts propose replacing coffee or other caffeinated drinks with honey each morning to combat fatigue. Try spreading honey on a piece of toast or adding honey to a cup of decaffeinated tea as a means of waking you up.

Moreover, studies have illustrated that honey contains antioxidants that were able to prevent cognitive decline and dementia while enhancing the brain’s circulation.

Another popular use of honey is the famous Milk and Honey Remedy. A glass of warm milk with a teaspoon of honey helps calm the soul and induce sleep.

As you can clearly see, honey does a lot more than sweeten up foods. The question is: do all types of honey have these properties? If so, which is the best choice?

Raw honey is the type that’s closest to the way the bees make it since it is extracted right from the honeycomb.

Raw honey is amber colored and has traces of pollen and wax. Because of the pollen, eating raw honey helps immunize against allergies. Many experts recommend raw honey for optimal health benefits – not the commercially pasteurized honey that is filtered of all the good stuff. Raw honey has all the vitamins, nutrients, and enzymes intact. Raw honey contains the antioxidants, and antibacterial properties discussed above. Raw honey also helps ward off allergies, boosts immune function, and promotes digestive health.

The honey that we all think of, and that most probably fills up our honey dishes, has no medical value. It’s all sugar – mainly high fructose corn syrup, which has been linked to diabetes, obesity, hypertension, and liver damage.

Wild honey, like raw honey, is the form highly recognized for the healing benefits. Wild honey is dark in color and not as sweet.

I’m sure many of you have enjoyed tea with honey to cure the common cold.  Many of you have probably even tasted spoonfuls of honey to suppress a cough. How about this old-fashioned remedy to soothe a sore throat? A chopped onion in honey.

Why are there so many remedies with honey? That’s because honey is considered a demulcent –meaning it soothes inflamed mucous membranes. Not only does honey soothe the throat, but it also kills certain bacteria that cause infections. Buckwheat honey is popular for its common cough and cold treatment.

It is questionable if organic honey even exists. Many beekeepers admit that organic honey is almost impossible. Some people have the opinion that all honey available in the market is natural and obtained from the wild. Others feel that, during its production, the honey gets sprayed and contaminated with the pesticides sprayed on the crops and weeds.  The bees often get sprayed and are poisoned with the pesticide, and many times, the bees collect pollen and nectar that has been contaminated. Completely pesticide-free bees and honey is nearly impossible, but hey, if it makes you feel better if it says “organic” on the jar, then go for it.

There are many more types of honey out there. These are just a few basic ones out of the 40. Don’t serve all 40 at your Rosh Hashana meal! One is enough to make you have a sweet, healthy, and happy new year!

Cindy Weinberger MS, RD, CDN, is a Master’s level Registered Dietitian and Certified Dietitian-Nutritionist. She graduated CUNY Brooklyn College receiving a Bachelor’s in Science and Master’s degree in Nutrition and Food Sciences. She is currently a private nutrition consultant in Brooklyn and the Five Towns. She can be reached at CindyWeinberger1@gmail.com.